Porgies are found in tropical as well as cooler waters, and are bottom-dwelling carnivores. Most species possess grinding, molar-like teeth, for eating crustaceans. Ref: https://www.fishbase.de/summary/1753

Heads up! Many creatures change during their life. Juvenile fish become adults and some change shape or their colour. Some species change sex and others just get older. The following creature(s) are known relatives of the White Seabream (Juvenile). Click the image(s) to explore further or hover over to get a better view! 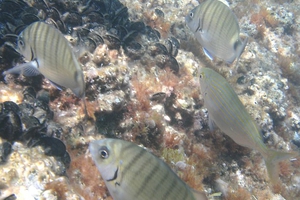