Found in pairs, family groups, and large schools, sheltering in the arms of staghorn corals, over lagoons, coral and rocky reefs.
They feed on algae and planktonic crustaceans.
Juveniles around coral heads, sea anemones, and in the spines of sea urchins.
Length - 14cm
Depth - 1-55m
Widespread Indo-Pacific

Damselfish are egg layers.
First they clear a site ready for a nest, then engage in a mating dance with rapid swimming and fin movements, during this time the males will often turn a shade or two darker and may display white blotches. Spawning occurs at dawn. (edit) Ref: http://www.fishbase.org/summary/5112

Heads up! Many creatures change during their life. Juvenile fish become adults and some change shape or their colour. Some species change sex and others just get older. The following creature(s) are known relatives of the Three-spot Dascyllus (juvenile). Click the image(s) to explore further or hover over to get a better view! 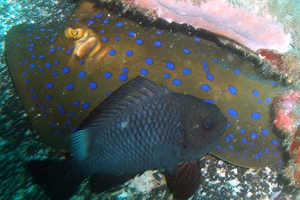