Jacks are fast swimming fish that can roam over great distances. The larger fish hunt other fish and the smaller fish eat zooplankton. In turn they are hunted by large Tuna and Dolphins. Ref: https://www.fishbase.se/summary/Trachinotus-falcatus.html

Heads up! Many creatures change during their life. Juvenile fish become adults and some change shape or their colour. Some species change sex and others just get older. The following creature(s) are known relatives of the Permit. Click the image(s) to explore further or hover over to get a better view! 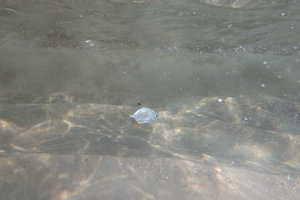