Most Snappers live in moderate depths, however there are a few that live much deeper. Juveniles found on inshore reefs.
They are nocturnal predators that mainly feed on fish, but will eat crustaceans, gastropods and cephalopods.
Some smaller family members eat zooplankton. Ref: https://www.fishbase.se/summary/lutjanus-synagris.html

Heads up! Many creatures change during their life. Juvenile fish become adults and some change shape or their colour. Some species change sex and others just get older. The following creature(s) are known relatives of the Lane Snapper (Juvenile). Click the image(s) to explore further or hover over to get a better view! 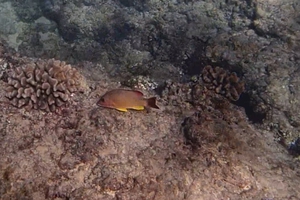