Found singly or in shivers during the day, sometimes resting on the bottom, dispersing at night to cruise over the reefs in search of prey. Over deep areas near drop-offs, atoll passes, shallow lagoons with strong currents and in deep oceanic waters.
They feed nocturnally on crustaceans, fish, invertebrates, lobsters, octopus and squid.
Length - 250cm
Depth - 0-1000m
Widespread Indo-West Pacific

This is one of the most common sharks on Indo-Pacific coral reefs.
Occasionally aggressive and dangerous.

Requiem Sharks have some of the most potentially dangerous sharks in their family and are responsible for over half of shark attacks. They can also be difficult to identify! Ref: https://www.fishbase.se/summary/861

Heads up! Many creatures change during their life. Juvenile fish become adults and some change shape or their colour. Some species change sex and others just get older. The following creature(s) are known relatives of the Grey Reef Shark. Click the image(s) to explore further or hover over to get a better view! 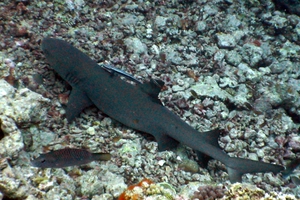