In Queensland this fish is totally prohibited from fishing, if caught accidentally it should be carefully returned to the water!!

This is the largest Indo-pacific grouper, weighs at least 288kgs!
Groupers are solitary carnivores that hunt near the bottom usually at dusk. Food is drawn into their mouths by a powerful suction when they open their overly large mouths and then swallowed whole.
Spawning is seasonal and controlled by the moons phase. Ref: https://www.fishbase.org/summary/6468

Heads up! Many creatures change during their life. Juvenile fish become adults and some change shape or their colour. Some species change sex and others just get older. The following creature(s) are known relatives of the Giant Grouper. Click the image(s) to explore further or hover over to get a better view! 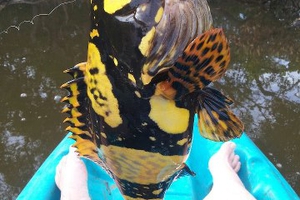