Found singly, either snout down mimicking whip corals, or swimming alongside herbivore fish, changing colour to match the fish and their surroundings, ready to pounce on any other unsuspecting crustacean or fish. Varies in colour to match surroundings or fish they are stalking!
They feed by opening their mouths to the size of their bodies and sucking in their prey of crustaceans and small schooling reef fishes.
Length - 80cm
Depth - 2-25m
Widespread Western Atlantic, Caribbean

The Trumpetfish can be recognised by its long body, tubular snout with minute teeth, its chin barbel and the series of short dorsal spines.Their bodies are inflexible, supported by interwoven struts of bone. The colouration of this species is variable. It is often brown or green with pale stripes and bars, and white spots posteriorly. A yellow colour variety is common in some areas. Individual fish have the ability to change their colours very quickly. Trumpetfish have the capability to rapidly expand their jaws into a circular gaping hole almost the diameter of their body when feeding. They are carnivores, hovering almost motionless just a few inches above the substrate, slowly inching their way towards unsuspecting prey. When they get close enough, they rapidly dart in, expanding their jaws. The rapid opening of their tube-like mouths creates a strong sucking force, drawing their prey straight into their oral cavities.

Although Trumpetfish can be found in various colours, because of their ability to change colour at will, there is in fact only one genus with two species, one Pacific and one Atlantic. Ref: https://www.fishbase.se/summary/964

Heads up! Many creatures change during their life. Juvenile fish become adults and some change shape or their colour. Some species change sex and others just get older. The following creature(s) are known relatives of the Trumpetfish (Juvenile). Click the image(s) to explore further or hover over to get a better view! 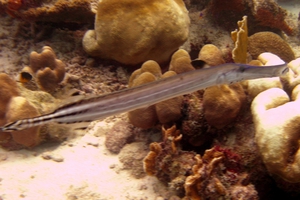