Found over sandy coral slopes and patch reefs, in clear lagoons and seaward reefs.
They feed on algae, coral, a wide range of invertebrates, and sponges.
Juveniles found over mud and weedy bottoms of estuaries and coastal waters, they have zebra stripes, changing to spots and blotches, as they grow.
These are the largest Pufferfish.
Length - 120cm
Depth - 3-60m
Widespread Indo-Pacific

The bodies of Pufferfish are covered in a toxic mucus, if the skin or flesh is consumed it can be fatal to humans.
When threatened they will puff up like a football to deter predators. Ref: https://www.fishbase.se/summary/Arothron-stellatus.html

Heads up! Many creatures change during their life. Juvenile fish become adults and some change shape or their colour. Some species change sex and others just get older. The following creature(s) are known relatives of the Star Puffer (Juvenile). Click the image(s) to explore further or hover over to get a better view! 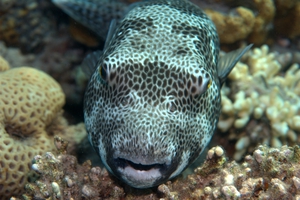