Found singly or in family groups, hiding during the day, facing inwards in crevices and under rocks of coral formations, out at night foraging for food, over lagoons and seaward reefs.
They feed nocturnally on crustaceans and fish.
Length - 20cm
Depth - 2-80m
Widespread Indo-Pacific

Lionfish can be found during the day, hovering above the ground, in caves or crevices, often upside down. At night they are out in the open hunting.
When disturbed they raise their feathery fins as a warning and will usually move off out of harms way, however, if cornered they are able to charge at considerable speed.
Their beautiful feathery pectoral and Dorsal Fins are highly venomous. Ref: https://www.fishbase.se/summary/Pterois-antennata

Heads up! Many creatures change during their life. Juvenile fish become adults and some change shape or their colour. Some species change sex and others just get older. The following creature(s) are known relatives of the Spotfin Lionfish (Juvenile). Click the image(s) to explore further or hover over to get a better view! 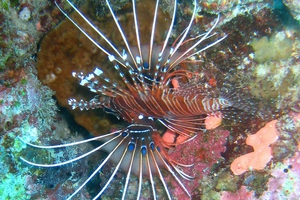