Found in pairs, in areas of mixed rubble and sand, where one fish lifts and turns a piece of rubble while the other fish catches the prey, over semi-exposed reef flats, lagoons and seaward reefs.
They feed on crabs, molluscs, sea urchins, brittle stars, and worms.
Juveniles found singly, around large bommies and rubble areas, swimming around like a leaf floating.
Length - 30cm
Depth - 3-25m
Widespread Eastern Pacific, Indo-Pacific

Most reef fish seen by divers during the day, are grazers, they cruise around, just above the surface of the coral, or snoop into crevices, foraging for food.
Wrasses have small protruding teeth, which they use to graze the bottom, taking in a variety of algae, crustaceans, such as crabs, eggs, shrimps, snails and worms. Any hard coats or thick shells, are then ground down by their pharyngeal jaws, and the delicacies inside digested.
From juvenile to adult, wrasses dramatically alter their colour and body shapes.
Wrasses are always on the go during the day, but are the first to go to bed and the last to rise.
Small wrasses dive below the sand to sleep, and larger wrasses wedge themselves in crevices. Ref: https://www.fishbase.se/summary/Novaculichthys-taeniourus

Heads up! Many creatures change during their life. Juvenile fish become adults and some change shape or their colour. Some species change sex and others just get older. The following creature(s) are known relatives of the Rockmover Wrasse. Click the image(s) to explore further or hover over to get a better view! 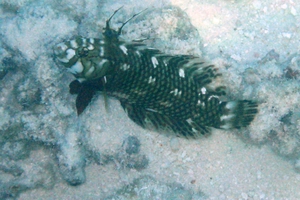