Found singly hiding in caves, crevices and holes in the rocks during the day, out foraging for food at night over shallow clear water reef plateau's and seaward reefs, sometimes in surf zones.
They feed nocturnally on crustaceans, detritus and invertebrates.
Juveniles often found wedged in corals with just the antenna showing.
Length - 46cm
Depth - 0-900m
Widespread Indo-Pacific

Lobsters live in caves and crevices during the day, often several together, coming out at night to feed.
Sometimes caught in the torches of divers where they scuttle off back into the dark.
They do not have true claws, the soft and flexible tail is used for swimming rapidly backwards, for short distances to get away from danger.
Spiny lobsters are caught in baited lobster pots for gourmet dining. Ref: https://en.wikipedia.org/wiki/Panulirus_versicolor

Heads up! Many creatures change during their life. Juvenile fish become adults and some change shape or their colour. Some species change sex and others just get older. The following creature(s) are known relatives of the Painted Rock Lobster (Juvenile). Click the image(s) to explore further or hover over to get a better view! 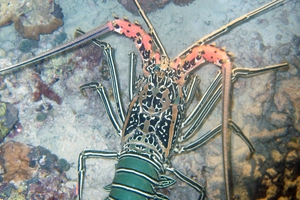