Found singly or in schools, over rubble, sand, and seagrass beds, in lagoons and over reefs. Variable in colour, quickly changing with mood.
They feed on crustaceans, invertebrates, and molluscs.
Juveniles found over weedy areas of reefs.
Length - 45cm
Depth - 0-30m
Widespread Indo-Pacific

Most members of Lethrinidae are able to rapidly switch on and off dark mottled patterns, spots and bars to deter predators. Ref: https://www.fishbase.se/summary/1847

Heads up! Many creatures change during their life. Juvenile fish become adults and some change shape or their colour. Some species change sex and others just get older. The following creature(s) are known relatives of the Orange-striped Emperor (Juvenile). Click the image(s) to explore further or hover over to get a better view! 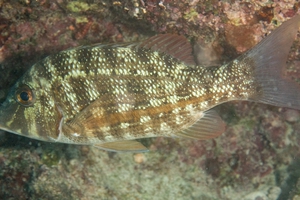