Found singly and territorially in the lower surge zone of deep lagoons and seaward reefs rich in coral growth.
They feed on benthic algae, fish, hydrozoans, invertebrates and sponges.
Females identified by spots over nose. Males plain over nose.
This fish was just 1cm long I thought it was just a piece of seaweed!!
Length - 30cm
Depth - 1-50m
Widespread Indo-Pacific

These triggerfish build a shallow nest in the sand with tow adults guarding the eggs, they become extremely aggressive to fish and divers alike.

Triggerfish have a hard spine Dorsal Fin that can be locked.
When sleeping this spine is used to wedge them into place in a crevasse and so deter predators from pulling them out of their bed!
The spine is also held erect as a warning to other fish to stay away.
Several large Titans blow shallow depressions in the sand for nesting and if approached will raise this spine as a warning, if ignored they may charge, even divers! especially the Titan Triggerfish who will take a tasty bite!! Beware!!!
Ref: https://www.fishbase.se/summary/6025

Heads up! Many creatures change during their life. Juvenile fish become adults and some change shape or their colour. Some species change sex and others just get older. The following creature(s) are known relatives of the Orange-lined Triggerfish (Juvenile). Click the image(s) to explore further or hover over to get a better view! 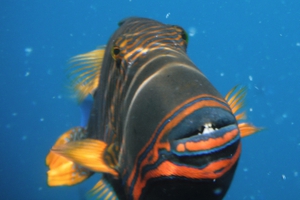