Found singly during the day, close to caves and under ledges dispersing at night hunting for food over clear lagoons and seaward reefs rich in coral growth.
They feed on benthic crustaceans, fish and molluscs.
Juveniles found singly close to the shelter of corals.
Length - 72cm
Depth - 1-30m
Widespread Indo-West Pacific

Juveniles mimic the movement of a poisonous flatworm for defence against predators.
With age they gain more spots and the spots reverse from white to black as they age.

In some areas of the world 'Grunts' are better known as 'Sweetlips' distinguished from other species by their very large rubbery lips.
'Grunts'because they "grunt," the grunting sound is produced by their flat teeth plates rubbing together and this is amplified by their air bladders.
Found either singly or in schools hovering or motionless over the reef during the day, becoming nocturnal predators. Ref: https://www.fishbase.se/summary/6364

Heads up! Many creatures change during their life. Juvenile fish become adults and some change shape or their colour. Some species change sex and others just get older. The following creature(s) are known relatives of the Many-spotted Sweetlips (Juvenile). Click the image(s) to explore further or hover over to get a better view! 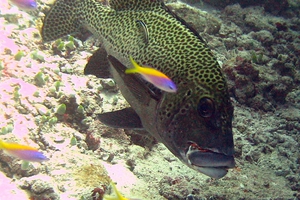