Filefish can alter their colour and pattern to match their surrounds and so deter predators.
Although closely related to the Triggerfish, their "trigger spine" cannot be locked into place. (edit) Ref: https://www.fishbase.se/summary/Paramonacanthus-japonicus.html

Heads up! Many creatures change during their life. Juvenile fish become adults and some change shape or their colour. Some species change sex and others just get older. The following creature(s) are known relatives of the Japanese Filefish (Juvenile). Click the image(s) to explore further or hover over to get a better view! 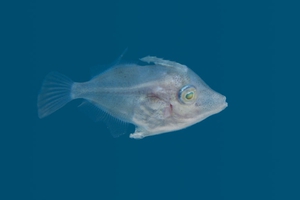