Found in the aquarium trade!

Toadfish can make a load croaking noise with their swim bladders. They breathe air when out of water for up to 24hrs. Their mouth can open and expand to the width of their bodies to engulf large prey. Has poisonous spines. Ref: https://www.fishbase.se/summary/6391

Heads up! Many creatures change during their life. Juvenile fish become adults and some change shape or their colour. Some species change sex and others just get older. The following creature(s) are known relatives of the Grunting Toadfish (Juvenile). Click the image(s) to explore further or hover over to get a better view! 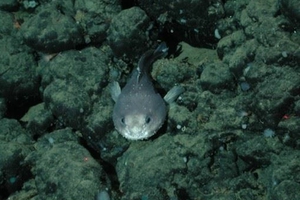