Found coiled into a ball and hiding during the day, often attached to gorgonians, sponges, or in dark recesses of the reef, climbing to an elevated position at night, spreading their arms and facing the current, to feed on passing zooplankton.
They feed on zooplankton.
Length - 100cm
Depth - 0-30m
Widespread Western Atlantic, Caribbean

Sea Stars have remarkable regenerative powers, when attacked and damaged by predators they are able to grow new arms. They usually have five arms but have been found with 4 or 6 arms, this may be because more than one arm has been damaged at one time!
They possess a cleverly evolved arsenal of hydraulic tube feet connected to an elaborate water-vascular system that encircles the animal's mouth and extends via five radial canals down the centre of each arm.
Their mouth is underneath, but their prey is absorbed outside their mouths by forcing out their digestive organs from their stomach.
Sea Stars are carnivores and feed on almost any food including molluscs, worms, detritus and each other!
Some sea stars like the crown of thorns can be venomous. Ref: https://en.wikipedia.org/wiki/Astrophyton

Heads up! Many creatures change during their life. Juvenile fish become adults and some change shape or their colour. Some species change sex and others just get older. The following creature(s) are known relatives of the Giant Basket Star (Juvenile). Click the image(s) to explore further or hover over to get a better view! 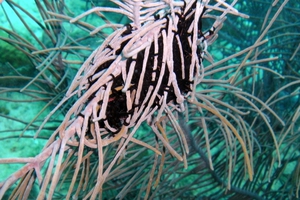