Found singly along steep drop-offs, over clear coastal and outer reefs. It has strong jaws, which can be used to crush and eat sea urchins, crustaceans, and hard-shelled molluscs.
They feed on crabs, crustaceans, molluscs, tunicates, and sea urchins.
Juveniles found in or close to caves, rich in invertebrate growth.
Length - 50cm
Depth - 1-75m
Widespread Indo-Pacific

This fish has a form of camouflage that is similar to counter shading. From below the white spots blend in with the surface of the water. From above the fish will blend with the coral reef environment below.

Triggerfish have a hard spine Dorsal Fin that can be locked.
When sleeping this spine is used to wedge them into place in a crevasse and so deter predators from pulling them out of their bed!
The spine is also held erect as a warning to other fish to stay away.
Several large Titans blow shallow depressions in the sand for nesting and if approached will raise this spine as a warning, if ignored they may charge, even divers! especially the Titan Triggerfish who will take a tasty bite!! Beware!!! Ref: https://www.fishbase.se/summary/2300

Heads up! Many creatures change during their life. Juvenile fish become adults and some change shape or their colour. Some species change sex and others just get older. The following creature(s) are known relatives of the Clown Triggerfish (Juvenile). Click the image(s) to explore further or hover over to get a better view! 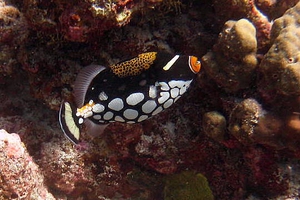