Found in both shallow to deeper waters, of coral and rocky reefs. Colourful visual displays, for camouflage, to deter predators and when mating.
They feed on crustaceans and fish.
Length - 50cm
Depth - 0-55m
Widespread Indo-West Pacific


This is the second largest Cuttlefish and has one eye flap where as the larger similar species Sepia apama has three eye flaps.

Cuttlefish possess the ability to swim in different manners, usually gently rippling their side fins. However when in danger, the cuttlefish sucks water into their body cavity and expels it through a funnel like extension on the underside of the body, causing a backward propulsion enabling the cuttlefish to escape from predators.
They are also able to shoot a cloud of black ink at predators when threatened.
They feed by catching their prey by two powerful tentacles which shoot out from beneath the creatures eyes. The prey is then pulled toward the animal's strong beak and crushed before consuming.
Cuttlefish gather in their hundreds of thousands to spawn.
Males can only produce once and the females die shortly after laying their eggs. (edit) Ref: https://en.wikipedia.org/wiki/Sepia_latimanus

Heads up! Many creatures change during their life. Juvenile fish become adults and some change shape or their colour. Some species change sex and others just get older. The following creature(s) are known relatives of the Broadclub Cuttlefish (juvenile). Click the image(s) to explore further or hover over to get a better view! 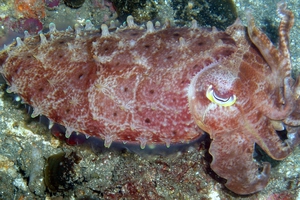