Surgeonfish have a blade like spine in the tail that points outwards when bent, unicorns have two hook-like plates along the tail, these are used for defence and are as sharp as a surgeons scalpel, hence the name "Surgeonfish".
Some species are venomous. Ref: https://www.fishbase.se/summary/Ctenochaetus-cyanocheilus

Heads up! Many creatures change during their life. Juvenile fish become adults and some change shape or their colour. Some species change sex and others just get older. The following creature(s) are known relatives of the Bluelipped Bristletooth (Juvenile). Click the image(s) to explore further or hover over to get a better view! 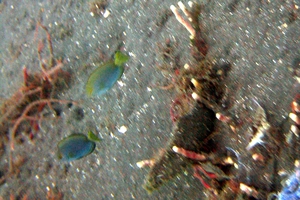