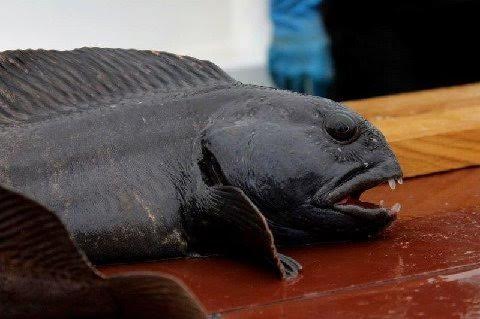 We were in a small village in northwest Iceland – noted only for fermented shark (which we all ate) — and it was a small bay with fishing around the bay the only occupation. I thought I MUST go deep sea fishing in the Arctic Ocean. . and yes, I went one midnight and really had an experience catching fish!

So in late evening while it was still stormy, I went over to the bay and asked a fisherman if he could take me out. He thought the weather much too wild. So I asked him if he would call his fisherman friends. Even if it were in the middle of the night, I wanted to go – and it was 24 hour light.

He did. One said he would take me along at 3am. And so this tale.

I caught the fish below. As I swung it on board, its mouth open and huge teeth, the fish’ teeth grabbed the vertical metal pole going up from the deck. . and hung on. He had to be pried off and it was not easy. The fisherman said that he does see a fish like that — he believed it lived at the bottom and this catch was RARE.

← PreviousSea Fishes and Invertebrates of the Mediterranean

View all articles by Lorraine Brennan