This is the largest and most aggressive of Triggerfish, in fact of any fish, especially when nesting when they will swim at speed and possibly take a chunk of flesh!!

The Titan is distinctively coloured. The scales have dark centres. There is a black region with yellow spots covering the eyes and extending to the pectoral fin bases. The dorsal and Anal Fins have black margins. The fish is not a pelagic species and generally lives in the flat areas of the reef.
The Titan can be very aggressive towards divers and snorkellers. Especially during reproduction season it is very territorial and will guard its nest (which it lays in a flat sandy area) vigorously against any intruders. Due to its size and strong teeth it can inflict serious injury. Bites may also be ciguatoxic. The Titan Triggerfish will not always bite, but can charge with great speed at snorkellers and divers escorting them out of their territory. When the males (most colourful) start swimming in your direction, the best thing to do is swim away backwards kicking your fins as a defence. Failure to do so may result in being bitten.
Beautiful fish, great parent, but evil temper - BEWARE!!!

These are the workers of the reef, often busy turning over rocks, stirring up the sand and biting off pieces of branching coral. This is why one often sees other smaller fish species around it who feed from the left overs.
Triggerfish have a hard spine Dorsal Fin that can be locked.
When sleeping this spine is used to wedge them into place in a crevasse and so deter predators from pulling them out of their bed!
The spine is also held erect as a warning to other fish to stay away.
Several large Titans blow shallow depressions in the sand for nesting and if approached will raise this spine as a warning, if ignored they may charge, even divers! especially the Titan Triggerfish who will take a tasty bite!! Beware!!!
Ref: https://www.fishbase.se/summary/6026

Heads up! Many creatures change during their life. Juvenile fish become adults and some change shape or their colour. Some species change sex and others just get older. The following creature(s) are known relatives of the Titan Triggerfish (Juvenile). Click the image(s) to explore further or hover over to get a better view! 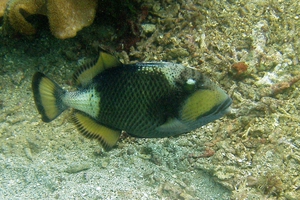