Found singly, pairs, or in trios, sitting amongst corals, jetties, pylons, ropes, sponges, etc, camouflaged with the colour and pattern of their seat and surroundings, over lagoons and fringing reefs.
They feed on crustaceans and small fish.
Length - 45cm
Depth - 0-70m
Widespread Eastern Pacific, Indo-Pacific

These are the largest in the species.

Frogfish are masters at camouflage and will change to match their surroundings. They lure their prey with a stalk between their eyes that copies the movements of its prey. Their mouth can open and expand to the width of their bodies to engulf its prey. Ref: http://www.fishbase.org/summary/Antennarius-commerson.html

Heads up! Many creatures change during their life. Juvenile fish become adults and some change shape or their colour. Some species change sex and others just get older. The following creature(s) are known relatives of the Giant Frogfish (Juvenile). Click the image(s) to explore further or hover over to get a better view! 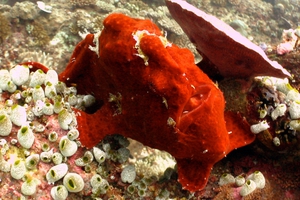